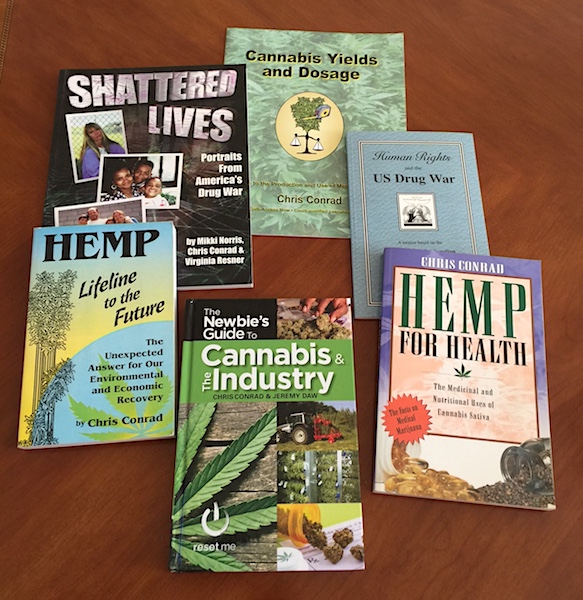 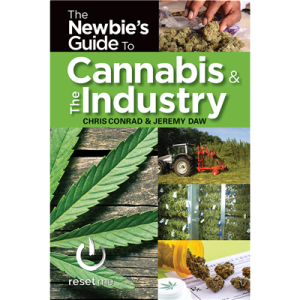 Chris Conrad’s newest book, The Newbie’s Guide to Cannabis and the Industry (with Jeremy Daw) is the first introductory text to the vast world of legal cannabis written for a mainstream audience — the perfect gift for the friend, family member or co-

worker, regulator, investor or elected official. who knows better than to trust the drug war hysteria of the past but doesn’t know where to get the straight dope on this rapidly-growing industry.

While the content delves deeply into the cannabis experience and commercial opportunities, the authors do not presuppose that their reader knows things, so it clearly delineates cannabis hemp

Read an interview with Reset.me about the Newbies Guide. 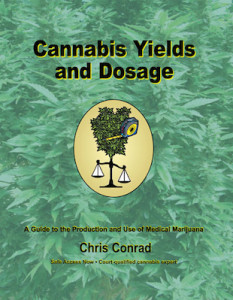 There have been eight editions published of this popular primer on calculating reasonable quantities of cannabis.

Chris Conrad’s landmark treatise, Cannabis Yields and Dosage has provided the scientific basis for devising policies on medical use and was presented at the Fifth International Clinical Conference on Cannabis Therapeutics, 2008, California Association of Toxicology, 2012 and International Pharmaceutical Academy, 2015. It is used as a textbook at Oaksterdam University and is currently available in its eighth updated edition.

The 100 square feet of garden canopy formula Conrad introduced, along with Safe Access Now and the Sonoma Alliance for Medical Marijuana was adopted by the state legislature in California’s MCRSA medical marijuana law as a lawful amount, along with several other established safe harbor provisions in the SB 420 laws and shows variations that need to be considered in the “reasonable quantity” Proposition 215 Compassionate Use Act defenses.

Cannabis Yields and Dosage is a textbook used at Oaksterdam University.

Hemp, Lifeline to the Future, Chris Conrad’s first book, helped launch the modern hemp industry and cannabis reform movement. The book opens with a vision of how cannabis naturally fits into modern human civilization and then sytematically explains how to make that dream a reality.

Conrad reintroduces horticultural and agricultural cannabis hemp as a sustainable natural resource and paints a picture of how the future could be once this plant is reinstated to its proper place as the premier sustainable resource to provide for the world’s cultures and economy. Paper, fiber, food and fuel, medicine and more. The book provides projects to do at home, recipes and business possibilties.

Many of the hemp products this book discusses as being potential for commerce (written in 1993, rev. 1994) have since come to fruition as a direct result of this formative research. However, Conrad’s vision goes far beyond what society has accomplished since he first laid down the gauntlet. To find out what still lies ahead, read Hemp: Lifeline to the Future. His book has been translated into Italian and portions have been translated into various other languages, especially the first chapter. The 1994 edition of his book was the first American book to utilize hemp paper in nearly 100 years.

The first chapter, “A day in the house that hemp built,” is available as a Kindle download Hemp Lifeline To The Future – Chapter One: The Unexpected Answer for Our Environmental and Economic Recovery (Hemp: Lifeline to the Future)

A Japanese language translation is also available on Kindle Hemp: Lifeline to the Future: The Unexpected Answer for Our Environmental and Economic Recovery 2 (Japanese Edition)

Good health is a combination of wellness characteristics, not merely the absence of disease. in Hemp for Health Chris Conrad discusses medical marijuana in a wide array of forms to treat a vast spectrum of symptoms but also the nutritional value of hempseed and horticultural and environmental uses of the cannabis plant.

Conrad posits that having healthy food while living in a less toxic planet will reduce ill health as much and even more than pharmaceutical drugs do. This was one of the first books to discuss CBD (cannabidiol) and examine the human endocannabinoid system. The book is designed to be put directly into practice and contains handy recipes for people who want to get started on using medical marijuana right away and a chart for people to track their health benefits.

Shattered Lives, Portraits From America’s Drug War, co-authored with his wife, Mikki Norris, and their colleague, Virginia Resner, explores the human cost of America’s prison-based drug policy. This is a heart wrenching photo album showing the human face of the harsh mandatory minimum sentences, conspiracy and property forfeiture laws, killings of civilians by law enforcement, deprivation of access to medical marijuana, prisons for profit, discriminatory drug testing, destruction of families and other human rights abuses done in the name of the racist and corrupt Drug War.

The HR 95 trio also wrote their followup book, Human Rights and the US Drug War as an analysis of U.S. drug war laws and policies within the context of the international human rights law and founding document of the United Nations, The Universal Declaration on Human Rights.

The structural violations of human rights incumbent in the Drug War are detailed and poignantly illustrated with true stories of the victims of these abuses.

Chris Conrad collaborated with author Jack Herer in the design, writing and production of one of the most important books in recent history, Hemp and the Marijuana Conspiracy: The Emperor Wears No Clothes. It became known as the Bible of the hemp and marijuana legalization movements.

“One day in early 1989 Chris Conrad, of Los Angeles, CA, read The Emperor. He became my ally. With his endless energies, editing and publishing talents and willingness to work 40 hours per week for almost five months, all the while holding down full-time resonsibilities as production manager at a major weekly newspaper, as well as many other responsibilities for numerous organizations and causes. During all this time his girlfriend, Mikki Norris, lent her support in so many ways to this project.

“Chris did all this without any compensation, yet he worked like he was getting paid a million for it. Chris is one of the most powerful, energetic, skilled and organized human beings I have ever known. He is a light bulb for all mankind. He designed every inch of this book and was its main editor and enthusiast.

“Also, we want to extend endless thanks to the rest of our dedicated entourage: Thanks to Chris’ and my associate editor and contributing writer, Lynn Osburn, … Judy Osburn, [etc.]” — Jack Herer

The efforts of the two to launch a national and global change based on the Business Alliance for Commerce in Hemp strategy that Conrad developed in 1988 with the speaking, touring and promotional machine that was Jack Herer. Conrad and he also coauthored the California Hemp Initiative and ran several unsuccessful petition drives to put it on the ballot in the early 1990s. Those efforts built the grassroots movement that brought in many of the signatures that qualified the first medical marijuana initiative in the world, California Proposition 215. Conrad went on to write numerous other books, curate museums, and was instrumental in the development of cannabis policy around the world.

Conrad, Herer and Kentucky perrenial candidate for governor Gatewood Galbraith were the three people most responsible for restoring the word “hemp” to the English lexicon and getting the new industrial hemp movement into motion. Conrad went on to become the first president of the Hemp Industries Association, among other accomplishments.

There are numerous subsequent and international iterations of Herer’s classic book, with nearly annual revisions being printed. A major update of the graphics took place after the turn of the millenium, and that book has likewise been updated numerous times.

The Emperor Wears No Clothes remains one of the most popular, inspiring and motivational books about cannabis hemp and marijuana that was ever printed.